My health philosophy includes making sure you have a tremendous variety of fruits and vegetables.  If it’s not possible to eat right because of a busy schedule or you’re traveling, then turn to the convenience of a simple capsule full of high quality superfoods. 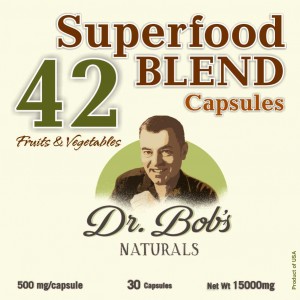 A 2007 study performed by John Hopkins Bloomberg School of Public Health Report made it clear that most people do not eat anywhere enough Fruits and Vegetables:

According to U.S. Department of Agriculture (USDA) guidelines, Americans should consume at least two servings of fruit and three servings of vegetables each day as part of a healthy diet. Researchers from the Johns Hopkins Bloomberg School of Public Health report that Americans are not meeting these minimum levels.  John Hopkins 2007 Report

During the 1999 to 2002 study period, 28 percent and 32 percent of U.S. adults met USDA guidelines for fruits and vegetables, respectively. John Hopkins 2007 Report

Approximately 62 percent did not consume any whole fruit servings, and 75 percent did not consume fruit juice. One-quarter of the study participants reported eating no vegetables. Comparing the two sets of data, there was a small decrease—from 35 percent in 1988 to 1994 to 32 percent in 1999 to 2002—in the percentage of the study group who met the daily vegetable recommendation.  John Hopkins 2007 Report

Bob McCauley, ND (Robert F., Jr.) was raised in Lansing, Michigan and attended Michigan State University (BA, 1980 in Journalism). He is a naturopathic doctor, Master Herbalist and a Certified Nutritional Consultant. He has traveled extensively, both domestically and abroad, visiting over 32 countries. He published Confessions of a Body Builder: Rejuvenating the Body with Spirulina, Chlorella, Raw Foods and Ionized Water (2000), Achieving Great Health (2005), The Miraculous Properties of Ionized Water, (2006) which is the only book on the market that exclusively addresses Ionized Water, Twelve (Fiction, 2007) and Honoring the Temple of God (2008). He considers himself a Naturalist, meaning he pursues health in the most natural way possible. He studies and promotes nature as the only way to true health. From 2002-2004 he hosted the radio program Achieving Great Health, which was heard by thousands of people each day. His guests included some of the most well-known and respected names in the natural health world. With the help of his father, Dr. Robert F. McCauley, Sr. (Doctorate in Environmental Engineering, MIT, 1953) they started Spartan Water Company in 1992, which sold vended water machines in supermarkets. Robert Jr. founded Spartan Enterprises, Inc. in 1993. He is a Certified Water Technician with the State of Michigan. He is also a Type II Public Water Supply Specialist and has the certifications of S-5 and D-5. The McCauley family has a long history in the water industry. Bob's father pioneered environmental issues regarding ground water and drinking water quality. He received his Ph.D. from the Massachusetts Institute of Technology (MIT) in 1953 for his thesis on removing radioactive strontium from water. He earned his doctorate in Environmental Engineering in less than 2 years, one of the shortest doctoral studies in the history of MIT. He taught civil, sanitary and environmental engineering at Michigan State University for 18 years before retiring to run Wolverine Engineers & Surveyors of Mason, Michigan, for 17 years. His reputation throughout Michigan as a water quality expert was legendary. Bob worked for his father's company for 12 years learning the water business, which dealt primarily with municipalities, including water quality and sanitary sewer issues. After apprenticing with his father, Bob moved on to the bottled water business. He established greater Michigan's biggest selling bottled water: Michigan Mineral – Premium Natural Water. He was introduced to Ionized Water in 1995 and has done more to promote Ionized Water than anyone else in the industry. Bob often lectures and offers seminars on his Seven Component Natural Health Protocol . Bob is a Certified Nutritional Consultant and a Certified Master Herbalist. He is also a 3rd Degree Black Belt and Certified Instructor of Songahm Taekwondo (American Taekwondo Association).
View all posts by Bob McCauley →
This entry was posted in General and tagged 42 blend, superfood, superfood blend. Bookmark the permalink.