Glutathione: Mother of All Antioxidants 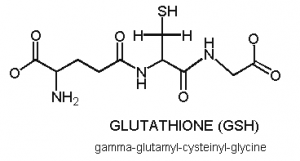 Glutathione was discovered in the year 1888. Glutathione is such a ubiquitous and versatile functioning molecule that shortly after its discovery in 1888 by J. de Rey-Pailhade, this small tripeptide molecule was deemed so important with so many vital functions that it was considered coincident with the “origin of life.”