I first met Randy Couture at the Arnold Sports Festival in Columbus, Ohio, in 2004. I was introduced to Randy by a friend (Fairfax Hackley – “Hack”) who had brought him in for the weekend activities. My background is in traditional martial arts (Tae Kwon Do) and I was unfamiliar with the sport of mixed martial arts.

What struck me about Randy was the high level of conditioning and fighting skills he displayed at his age, which is 46 (2009). His ring accomplishments are too numerous to mention. What has stuck out about him has been how he managed to fight, stay healthy and recover from injuries. As a long time martial artist and runner I was curious about what he did. Hack called me and said that he had been speaking to Randy for quite some time about water ionizers and the superfoods Spirulina and Chlorella. Hack said that he would arrange for Randy to give me a call and pitch my health protocol to him.

I talked to him a little bit about Spirulina, Chlorella and Ionized Water and explained how they can help anyone to live to their potential. With Randy, that would be training so he could fight to his full capacity, both mentally and physically. I have always maintained that anyone can do anything physically at any age if they want to do it.

I explained to Randy that he needed to Hydrate , Alkalize and Detoxify his body if he wanted to be truly healthy. That is what my health protocol is all about: drinking enough water, bringing our pH into balance and removing substances that don’t belong in the body (toxins).

A few months after he’d been using the Water Ionizer, Chlorella and Spirulina, Randy sent me a video endorsing the Watershed Wellness Health Protocol .  I didn’t even ask him to do a video for us and he came through anyway.  It’s the kind of down to earth guy Randy is.  It was a proud moment and one of personal triumph for me because I was able to connect with a world-class athlete and introduce him to my health protocol, one that exclusively promotes natural health. I knew that if Randy liked it, so would his many followers and protégés. Other martial artists and octagon fighters would discover what Randy is doing for his health and want to do the same. As an athlete myself, I know that adopting my health protocol has allowed me to perform so much better than I would have if I hadn’t done so. At 51, I don’t have any soreness in my joints. I am not prone to injuries. I run 3 – 5 miles and practice Tae Kwon Do techniques daily. I am not slowing down at all. In fact, I feel I am still building. Each year I manage to set a new record for the courses I run.  I know that if I can, anyone can do it. It only takes the desire and will to follow through. 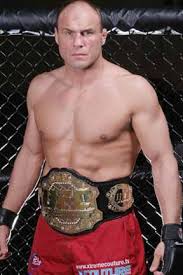 I am filled with pride to know that a world famous athlete, Randy Couture, will tell others of the results he got when he followed the most natural health protocol around.

The Biography Channel did Randy’s Story recently, which goes into great detail about his life, struggles, triumphs and disappointments.  It really does Randy justice.

An Olympic hopeful, Couture was selected as an alternate for the U.S. Wrestling Team for the 1988, 1992, and 1996 Summer Games. He also worked at Oregon State University as an assistant wrestling and strength conditioning coach. At the age of 33, Couture began his professional fighting career with the Ultimate Fighting Championship (UFC) in 1997. He made his debut in May that was billed as UFC 13, during which he defeated two heavyweight opponents—Tony Halme and Steven Graham.

At UFC 15, Couture knocked out opponent Vitor “Phenom” Belfort for his third straight win. His hot streak continued with a decision win over Maurice Smith for the heavyweight title in December 1997. After this victory, Couture ended up losing his next two matches—against Enson Inoue and then Mikhail Illoukhine—by submission.

In late 2000 and early 2001, Couture participated in a series of matches as part of the King of Kings II tournament in Japan. He first defeated Jeremy Horn by unanimous decision and then won his match with Ryushi Yanagisawa by majority. After another unanimous decision in his favor in his fight against Tsuyoshi Kohsaka, Couture advanced to his final fight at the tournament. He lost to Valentijn Overeem, having to surrender while being caught in Overeem’s guillotine choke hold. Describing his experiences in Japan, Couture explained to the Los Angeles Times that “The tournament format was tough. You could prepare for the guy you’d fight first, but you didn’t know who was coming next. Another thing that made it tough was the fatigue factor if you had to go the distance your first fight, but your opponent had a first-round win.”

Bob McCauley, ND (Robert F., Jr.) was raised in Lansing, Michigan and attended Michigan State University (BA, 1980 in Journalism). He is a naturopathic doctor, Master Herbalist and a Certified Nutritional Consultant. He has traveled extensively, both domestically and abroad, visiting over 32 countries. He published Confessions of a Body Builder: Rejuvenating the Body with Spirulina, Chlorella, Raw Foods and Ionized Water (2000), Achieving Great Health (2005), The Miraculous Properties of Ionized Water, (2006) which is the only book on the market that exclusively addresses Ionized Water, Twelve (Fiction, 2007) and Honoring the Temple of God (2008). He considers himself a Naturalist, meaning he pursues health in the most natural way possible. He studies and promotes nature as the only way to true health. From 2002-2004 he hosted the radio program Achieving Great Health, which was heard by thousands of people each day. His guests included some of the most well-known and respected names in the natural health world. With the help of his father, Dr. Robert F. McCauley, Sr. (Doctorate in Environmental Engineering, MIT, 1953) they started Spartan Water Company in 1992, which sold vended water machines in supermarkets. Robert Jr. founded Spartan Enterprises, Inc. in 1993. He is a Certified Water Technician with the State of Michigan. He is also a Type II Public Water Supply Specialist and has the certifications of S-5 and D-5. The McCauley family has a long history in the water industry. Bob's father pioneered environmental issues regarding ground water and drinking water quality. He received his Ph.D. from the Massachusetts Institute of Technology (MIT) in 1953 for his thesis on removing radioactive strontium from water. He earned his doctorate in Environmental Engineering in less than 2 years, one of the shortest doctoral studies in the history of MIT. He taught civil, sanitary and environmental engineering at Michigan State University for 18 years before retiring to run Wolverine Engineers & Surveyors of Mason, Michigan, for 17 years. His reputation throughout Michigan as a water quality expert was legendary. Bob worked for his father's company for 12 years learning the water business, which dealt primarily with municipalities, including water quality and sanitary sewer issues. After apprenticing with his father, Bob moved on to the bottled water business. He established greater Michigan's biggest selling bottled water: Michigan Mineral – Premium Natural Water. He was introduced to Ionized Water in 1995 and has done more to promote Ionized Water than anyone else in the industry. Bob often lectures and offers seminars on his Seven Component Natural Health Protocol . Bob is a Certified Nutritional Consultant and a Certified Master Herbalist. He is also a 3rd Degree Black Belt and Certified Instructor of Songahm Taekwondo (American Taekwondo Association).
View all posts by Bob McCauley →
This entry was posted in General and tagged MMA, randy couture, randy the natural couture, UFC. Bookmark the permalink.