Health Expert: “I Won’t Even Run to the Mailbox” – “Raw Foodists Are Idiots!”

Michael Savage, conservative talk show host, proves that you can be highly educated in what would appear to be health-related fields and yet know nothing about health.  Dr. Savage obtained a master’s degree in Medical Botany, as well as Medical Anthropology.   He earned his PhD. from the University of California at Berkeley in Epidemiology and Nutrition Sciences.

Savage began to read about this the other day on his radio program where he essentially said that any kind of exercise short of light bicycling was extremely dangerous for anybody over the age of 30.  For the record, I run vigorously every day and bring my heart rate to least 120.  I have been doing this for the last 30 years and show absolutely no signs that it is causing health problems.  Quite the contrary it is one of the things that continues to keep me as healthy as I am at 58 years old (2016).

Dr. Savage’s educational credentials, that of a Ph.D. in nutritional sciences, demonstrates without any doubt why people should be suspicious of those who have been educated by the mainstream institutions of higher learning.

“. . . all of you people are idiotic – idiotic to think that Raw-food is good for you.  All you deluded fools who think that by eating raw all you will live forever,  I have a little news for you.  I’m one of the few people in the media who actually know something about food and nutrition because I have a doctorate in the field and in particular have written many many books in the field prior to becoming a talk show host shall – take it from an expert – the reason men learn to use fire to cook his food was because A – you are not an animal and B – Raw-food is very dangerous.  It is a full of microbes.  It is filled with toxins of various kinds.”

You can call cooking your food civilized all you want.  Cooked food is – ultimately – the source of ALL Disease.

“I know there is a trend in America for eating raw foods.  Better watch and listen to me very, very, very carefully.”

Dr. Savage then goes on to relate a story of a Hawaiian man who became extremely ill and

the doctors could not figure out why.  Some months later it was determined that his food had been contaminated with rat feces and the toxins had made him deathly ill.

“He had a terrible illness, months of recovery, paralysis, etc.  What is the moral to this story?  Well, you can make a joke out of it if you wish or you can choose to stop eating raw food.  Your mother was right, cook your vegetables.  Your mother was right, wash your vegetables . . .  For god sakes we listen to Uncle Michael.  Wash your vegetables.  Cook your vegetables.  Don’t eat raw food.  But stop listening to what these whack jobs are telling you.  I know the story – ‘enzymes’ they’ll tell you, ‘enzymes’.  They don’t know what they’re talking about.  They don’t know what an enzyme it is.”  Michael Savage [Michael Savage Show]

An inner voice told me to keep running, keep exercising and eat raw foods.  S0 whose ‘inner voice’ should we listen to.  The advice that my inner voice offered me resulted in perfect blood work at 57 years old.  What kind of shape are you in Dr. Savage?

I ride a bicycle every day – but moderately. I don’t know that as a matter of fact.  I’m 58 years old and still work out vigorously daily.  I don’t have any joint issues.  I am not heading for a heart attack or a stroke and I certainly am NOT burned out.

How many runners do you know that by the time they are 40 had a knee replacement, a hip replacement?  So watch out with this extremism in your exercise, take the Taoist approach.  Believe me, I know what I’m talking about in regard to this and it’s the same with foods.  Stop with the extremism.”

This is what you can expect if you live on a cooked food diet. 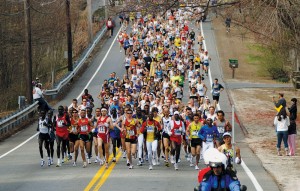 I believe Dr. Mercola, who I often disagree with, is completely correct to say that running Marathons are not healthy.  I’ve been a runner my entire life and I have always held this philosophy about running.  While I was in high school and college I would often run more than 10 miles a day, although I’ve never run a race in my life over 5 miles.  Running a marathon drains the body of all its resources, in particular its minerals.  One thing to remember about exercise is that it creates a city in the body as well as free radicals.  Therefore excessive exercise works against your health rather than for it.  My cousin nearly died of a heart attack while running a marathon because a piece of plaque became dislodged from one of his arteries then blocked his heart from pumping blood.  He lived on a meat and potato 100% cooked food diet, and those who live on that kind of diet can expect these kind of health problems.  Sorry, but it’s true.  I’m only the messenger: True health ONLY comes from Raw Fruits and Vegetables.

Dr Savage, stick to the politics and writing, things that you’re actually good at 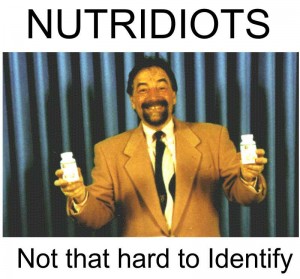 because when it comes to health you are yet another ‘know nothing’, or as I like to say, a nutridiot.  You are a classic nutridiot.

Bob McCauley, ND (Robert F., Jr.) was raised in Lansing, Michigan and attended Michigan State University (BA, 1980 in Journalism). He is a naturopathic doctor, Master Herbalist and a Certified Nutritional Consultant. He has traveled extensively, both domestically and abroad, visiting over 32 countries. He published Confessions of a Body Builder: Rejuvenating the Body with Spirulina, Chlorella, Raw Foods and Ionized Water (2000), Achieving Great Health (2005), The Miraculous Properties of Ionized Water, (2006) which is the only book on the market that exclusively addresses Ionized Water, Twelve (Fiction, 2007) and Honoring the Temple of God (2008). He considers himself a Naturalist, meaning he pursues health in the most natural way possible. He studies and promotes nature as the only way to true health. From 2002-2004 he hosted the radio program Achieving Great Health, which was heard by thousands of people each day. His guests included some of the most well-known and respected names in the natural health world. With the help of his father, Dr. Robert F. McCauley, Sr. (Doctorate in Environmental Engineering, MIT, 1953) they started Spartan Water Company in 1992, which sold vended water machines in supermarkets. Robert Jr. founded Spartan Enterprises, Inc. in 1993. He is a Certified Water Technician with the State of Michigan. He is also a Type II Public Water Supply Specialist and has the certifications of S-5 and D-5. The McCauley family has a long history in the water industry. Bob's father pioneered environmental issues regarding ground water and drinking water quality. He received his Ph.D. from the Massachusetts Institute of Technology (MIT) in 1953 for his thesis on removing radioactive strontium from water. He earned his doctorate in Environmental Engineering in less than 2 years, one of the shortest doctoral studies in the history of MIT. He taught civil, sanitary and environmental engineering at Michigan State University for 18 years before retiring to run Wolverine Engineers & Surveyors of Mason, Michigan, for 17 years. His reputation throughout Michigan as a water quality expert was legendary. Bob worked for his father's company for 12 years learning the water business, which dealt primarily with municipalities, including water quality and sanitary sewer issues. After apprenticing with his father, Bob moved on to the bottled water business. He established greater Michigan's biggest selling bottled water: Michigan Mineral – Premium Natural Water. He was introduced to Ionized Water in 1995 and has done more to promote Ionized Water than anyone else in the industry. Bob often lectures and offers seminars on his Seven Component Natural Health Protocol . Bob is a Certified Nutritional Consultant and a Certified Master Herbalist. He is also a 3rd Degree Black Belt and Certified Instructor of Songahm Taekwondo (American Taekwondo Association).
View all posts by Bob McCauley →
This entry was posted in General and tagged michael savage, raw food, raw food diet. Bookmark the permalink.