I first met Fairfax Hackley – Hack as I know him – in 2001 at the Arnold Sports Classic.  He had found a copy of my book, Confessions Of A Body Builder, Rejuvenating the body with Spirulina, Chlorella, Raw Foods and Ionized Water on Nature’s First Law, David Wolfe’s now closed store.  He contacted and invited me to the Arnold Sports Classic, which I 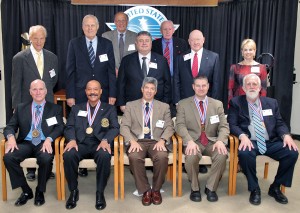 attended.  We’ve been friend ever since.  Hack introduced me to Randy Couture, former UFC heavy weight champion, who bought a water ionizer from me and still takes my chlorella and spirulina product.

Hack and I have remained friends ever since.  He’s a big fan of my work in the field of natural health and the feeling is mutual.  Hack is a voracious reader, which is how he found me in the first place, and he loves natural health.  He told me that he’d read every book he could get his hands on regarding the Raw Food Diet, which is of course, the healthiest diet we can live on. Receiving the Dwight David Eisenhower Fitness Award was not only a great honor for Hack, but one that was long overdue considering his dedication to the sport of bodybuilding and fitness.  Hack has been the MC for the Arm Wrestling Competition at the Arnold Fitness Classic since it’s inception over 30 years ago.

Receiving the Dwight David Eisenhower Fitness Award at the event was master personal trainer Fairfax Hackley, who won 12 class titles in bodybuilding and later served as a judge and as director of the Mr. America contest.  He spent more than 20 years in the sport, winning the International Federation of Body Building and Fitness (IFBB) Silver and Gold Awards for Excellence in Administration. He has trained numerous celebrities and athletes, including boxers and mixed martial arts (MMA) fighters.  He has worked closely with the Arnold (Schwarzenegger) Sports Festival in Columbus, Ohio.  The resident of Falls Church, Va., is a member of the International Sports Hall of Fame, serving on its advisory board.  The United States Sports Academy

The United States Sports Academy recently held its 33rd Annual Awards of Sport program, a celebration of sport and art and “A Tribute to the Artist and the Athlete.” The 2017 program was held on Thursday, November 9, 2017 in the Dr. Thomas P. Rosandich Gallery of the Academy in Daphne, Ala. Dean of Academic Affairs Dr. Stephen Butler served as Master of Ceremonies.

The Academy’s Awards of Sport honor those who have made significant contributions to sport in categories as diverse as the artist and the athlete. The awards honor exemplary achievement in coaching, all-around athletic performance, courage, humanitarian activity, fitness, and media, among others.

The Academy’s American Sport Art Museum and Archives (ASAMA) annually recognizes these men and women through its Sport Artist of the Year, Honorary Doctorates, Medallion Series, Distinguished Service Awards, Outstanding Athletes and Alumni of the Year awards. For more about the Academy, go to www.ussa.edu.