I get a kick out of watching Paula “I’m going to wrap it in bacon and then deep fry it” Deen on the Food Channel.  She reminds you of your friendly aunt that loves to cook and take care of everyone.  But the food she makes on her show is the unhealthiest fair on the Food Network.  It’s mostly fat, more fat, butter, heavy cream, whipped cream, chicken fat, pork fat, and then adds lots of salt and tops it all off with a drizzle of bacon fat.  Yum!  Looks like some of the tastiest poison you would ever want to put in your body.  How about bacon cheese burger with two donuts as the bun?  Most of what you see on the Food Channel is tasty poison, which is why you will never see a Raw Food preparation show on there.  It would alert their regular viewers that all their other programs, which are exclusively cook foods, are unhealthy. 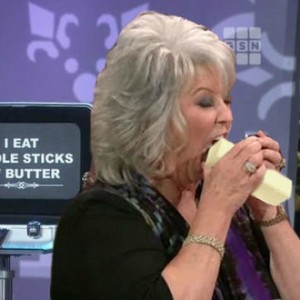 Unfortunately, Paula Deen will watch her life slip away for the taste of her own cooking, as will most of the population.  I wish I could eat pizza, chocolates and French fries because they are incredibly healthy, but they are not.  I like pizza, but I don’t eat it anymore because it’s unhealthy.  I don’t allow the taste of the foods I like to rule my life.

Paula found out about her diabetes a few months ago, but didn’t say anything publicly.  I’m sure she first wanted to close the deal as spokesman for Novo Nordisk, the pharmaceutical company that supplies her diabetes medication.  That may seem cynical but it is no coincidence that it coincided with her announcement.  Deen and her family are launching in a new ad campaign for the Novo Nordisk this month.  First she pushes deadly dishes, now worthless medications to correct the problems caused by those foods.  At least she’s making a buck on both ends.  I was worried that she wouldn’t.

What a great service Paula performs for her viewers. “I have always eaten in moderation,” she said. “You know, people see me on TV two or three times a day and they see me cooking all these wonderfully Southern, fattening dishes. That’s only 30 days out of 365.”  Deen shoots her show 30 days straight so she doesn’t have to eat the poisonous food that she makes on that show because it’s so unhealthy. That means that for most of the year she doesn’t even eat the food that she teaches America how to prepare.  “And it’s for entertainment. And people have to be responsible. Like I told Oprah a few years ago, honey, I’m your cook, not your doctor. You are going to have to be responsible for yourself.”  Let me get this straight: Paula makes tempting, delicious dishes that are full of sugar and fat and then she tells us to be disciplined and not to eat too much of them.  Sounds like the same line that a drug dealer might use: “Here’s the heroine and the needle.  Now don’t do too much of it or your addiction might get out of control and you’ll die.  I don’t want to lose any customers.”

Food personality Anthony Bourdain said in a TV Guide article that Deen is “the worst, most dangerous person to America,” who “revels in her unholy connections with evil corporations” and is “proud of the fact that her food is f—ing bad for you.”  I could not have said it better.

“Here’s the thing, you know, I’ve always encouraged moderation,” Deen said. “On my show, you know, I share with you all these yummy, fattening recipes, but I tell people ‘in moderation… You can have that little piece of pie.” That’s nice, but she is instructing people on how to cook meals that are deadly.  And she does so with such a sweet face and cute accent.

Paula said on the Today Show: Eating the kind of fattening, sugar-laden food that she prepares “is certainly part of the puzzle.”  First, there is no puzzle why that if you eat the kind of food Deen promotes on her show it makes you sick.  The only puzzle is why more people are not aware of how poisonous it is.  “There are many other things that can lead to diabetes.  Certainly genetics, certainly your lifestyle, certainly what you eat, certainly stress and last but not least is age.”  Certainly NOT!  She is flat out wrong about every one of those items except diet.  Genetics, stress, age and lifestyle (whatever she means by that) do NOT cause disease.  Stress produces a lot of acidity in the body, which is bad.  However, stress only becomes dangerous for someone whose body has been weakened by living on a cooked food diet, especially one like the kind Paula Deen promotes on her show.  A person such as those of us who live on a raw food diet do not have to worry about stress taking its toll since there are so many healthy things we can do to counteract its negative effects on the body.  Ultimately, all disease comes from our diet, and it is these kinds of ridiculous comments that people such as Paula Deen make who are not health professionals.  Although Deen knows how to cook, she knows nothing about health.  All she is doing is parroting what the medical community has always told us, which is complete misinformation.

I wish In the face of a serious disease such as diabetes Paula Deen remains defiant: “Diabetes diagnosis won’t change how I cook.”  No surprise.

For the record, chronic disease is something I will never face because I live on a diet comprised of raw fruits and vegetables, because that is where health comes derives, along with the right water, minerals, probiotics and the other components of my health protocol.

Bob McCauley, ND (Robert F., Jr.) was raised in Lansing, Michigan and attended Michigan State University (BA, 1980 in Journalism). He is a naturopathic doctor, Master Herbalist and a Certified Nutritional Consultant. He has traveled extensively, both domestically and abroad, visiting over 32 countries. He published Confessions of a Body Builder: Rejuvenating the Body with Spirulina, Chlorella, Raw Foods and Ionized Water (2000), Achieving Great Health (2005), The Miraculous Properties of Ionized Water, (2006) which is the only book on the market that exclusively addresses Ionized Water, Twelve (Fiction, 2007) and Honoring the Temple of God (2008). He considers himself a Naturalist, meaning he pursues health in the most natural way possible. He studies and promotes nature as the only way to true health. From 2002-2004 he hosted the radio program Achieving Great Health, which was heard by thousands of people each day. His guests included some of the most well-known and respected names in the natural health world. With the help of his father, Dr. Robert F. McCauley, Sr. (Doctorate in Environmental Engineering, MIT, 1953) they started Spartan Water Company in 1992, which sold vended water machines in supermarkets. Robert Jr. founded Spartan Enterprises, Inc. in 1993. He is a Certified Water Technician with the State of Michigan. He is also a Type II Public Water Supply Specialist and has the certifications of S-5 and D-5. The McCauley family has a long history in the water industry. Bob's father pioneered environmental issues regarding ground water and drinking water quality. He received his Ph.D. from the Massachusetts Institute of Technology (MIT) in 1953 for his thesis on removing radioactive strontium from water. He earned his doctorate in Environmental Engineering in less than 2 years, one of the shortest doctoral studies in the history of MIT. He taught civil, sanitary and environmental engineering at Michigan State University for 18 years before retiring to run Wolverine Engineers & Surveyors of Mason, Michigan, for 17 years. His reputation throughout Michigan as a water quality expert was legendary. Bob worked for his father's company for 12 years learning the water business, which dealt primarily with municipalities, including water quality and sanitary sewer issues. After apprenticing with his father, Bob moved on to the bottled water business. He established greater Michigan's biggest selling bottled water: Michigan Mineral – Premium Natural Water. He was introduced to Ionized Water in 1995 and has done more to promote Ionized Water than anyone else in the industry. Bob often lectures and offers seminars on his Seven Component Natural Health Protocol . Bob is a Certified Nutritional Consultant and a Certified Master Herbalist. He is also a 3rd Degree Black Belt and Certified Instructor of Songahm Taekwondo (American Taekwondo Association).
View all posts by Bob McCauley →
This entry was posted in General and tagged Anthony Bourdain, diabetes, fried foods, paula deen. Bookmark the permalink.