An algae product known as Cryptomonadales is grown in Taiwan and marketed throughout Asia, Australia and North America.  The claims made about this strain of chlorella, such as how it is grown and what strain it actually is, are ridiculous.   The algae that they say is grown is a strain known as Chlorella sorokiniana, which is named after the researcher who discovered it, Constantine Sorokin.

Chlorella sorokiniana is a thermopilic algae that thrives in warm water at temperatures of 100 – 107 degrees F (40 – 42 degrees C).  Most Chlorella strains are grown at much lower temperatures, around 55 – 80 degrees F (15 – 22 degrees C).  The biggest problem with Chlorella are the pheophorbides, an derivative of chlorophyll, chemical structures that are dangerous to our health if consumed in large quantities.  Pheophorbides must be controlled during the spray drying process.  Measured in milligrams as a percent of the food per grams with 60mg/100 grams being the limit allowed by law. Watershed Chlorella has a level of 27 – 30 mg pheophorbides.  Some Chlorella producers have over 180 mg pheophorbides, well over the maximum allowable contamination level.  Therefore, this chlorella cannot be sold for consumption alone but must be combined with other algae such as Spirulina in order to bring the pheophorbide to acceptable levels.  More than 50 chlorella companies in Taiwan went out of business in the 1970’s and 80’s because they could not control the Pheophorbide levels in the chlorella they were producing.

Chlorella pyrenoidosa contains Alpha Linolenlic Acid (ALA), another PUFA that that is an essential nutrient, meaning that it is required by body and must be consumed since the body cannot produce it. 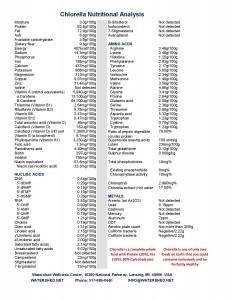 Chlorella sorokiniana contains both ALA and Beta linolenic acid (BLA), however only spirulina has gamma linolenic acid (GLA).  The claim by the producers of cryptomonadales that they have combined Chlorella sorokiniana with Spirulina plantenis into one strain of algae is completely false because this is simply not possible.  Spirulina is not an algae, but rather a cyanobacteria (blue bacteria) that is both animal and vegetable since it exhibits both characteristics regarding its biological classification. The blue in spirulina is phycocyanin, a powerful antioxidant.  Phyco means algae and cyanin means blue.  But Spirulina does not have a nucleus and therefore cannot be classified a plant and why it is classified as a cyanobacterium, or blue bacteria. 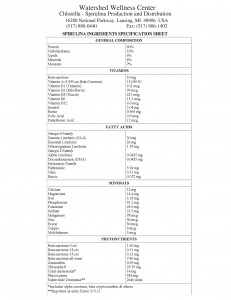 an animal, in this case a bacteria with an algae.  It would be like crossing a dog with a strain of corn.  There has been speculation that they have gene-spliced these two together, fusing them into a new species.  If that is true then it is a result of genetic modification (GMO), commonly known as franken-food because it is a food that has been tinkered with by man.  When man tinkers with nature rather than mold it to his benefit, things tend to go wrong.   That is meaning of Mary Shelley’s Frankenstein, that tinkering with nature will result in a catastrophe.

What the producers of cryptomonadales fail to produce is a Certificate of Analysis (COA).  A COA is provided with every batch of chlorella and spirulina that is produced. Algae products are not permitted to be sold without a COA, which is true of Herbal Extracts such as Ginkgo Biloba.   I would never purchase and/or sell a chlorella that did not have a COA and complete nutritional analysis such as this one.  Chlorella and Spirulina companies routinely refuse to offer a COA to the public, which is unfortunate since it is the COA that the algae industry rests its case on.  In the case of cryptomonadales it is even more imperative that a COA is offered to anyone who asks for it since they claim to have created a whole new strain of algae.  Until now, they have refused to release a COA of cryptomonadales.  And just to be clear, an analysis of what nutrients are in cryptomonadales is not a COA.  A COA must  be attached to a particular batch of algae that is produced and when it was produced.

The producer does not sell cryptomonadales® Chlorella Sorokiniana in powder form, which is quite odd since many people prefer to take chlorella and Spirulina in powder form rather than tablets.  If they were to release cryptomonadales in powder form their product could be analyzed and evaluated by a third party such as the Japan Food Research Laboratories, Tokyo, Japan, one of several companies capable of conducting such an objective, independent and reliable analysis.

My opinion is that Cryptomonadales® Chlorella Sorokiniana is a combination of Chlolrella sorokiniana and Spirulina plantenis, separate powders in tablet form and not a new strain of algae as the producers claim.  Spirulina must be combined with Chlorella sorokiniana in order to bring the pheophorbides down to acceptable levels, below 60mg/100 gram.  However, we don’t know what those levels are because they won’t publish their COA.  Other than the complete array of PUFAs and PPARs (alpha, beta and gamma linenloic acids), Cryptomonadales does not have much of an advantage over other forms chlorella such as Chlorella pyrenoidosa and Chlorella vulgarius. I want to be clear that I have nothing against Cryptomonadales® Chlorella Sorokiniana.  It is a good health product to consume, but the producers are misrepresenting what it is and how it is produced.  They are being deliberately deceptive about their own product in order to sell more of their product and market it as being the latest technology and innovations in the world of health.  The truth is that this kind of deliberate misrepresentation is hurting the algae industry because it causes confusion. My question is that why is there has not been more calls from within the scientific community

I invite them to provide the world with evidence that they have indeed created a new strain of algae by combining a bacterium (Spirulina) with a plant (Chlorella).  Until now, they have offered no scientific or photographic evidence that their claims are indeed true.  Therefore, the untenable claims made by the producers of Cryptomonadales are perpetrating a hoax by claiming that they have invented a new strain of algae in my opinion.

Bob McCauley, ND (Robert F., Jr.) was raised in Lansing, Michigan and attended Michigan State University (BA, 1980 in Journalism). He is a naturopathic doctor, Master Herbalist and a Certified Nutritional Consultant. He has traveled extensively, both domestically and abroad, visiting over 32 countries. He published Confessions of a Body Builder: Rejuvenating the Body with Spirulina, Chlorella, Raw Foods and Ionized Water (2000), Achieving Great Health (2005), The Miraculous Properties of Ionized Water, (2006) which is the only book on the market that exclusively addresses Ionized Water, Twelve (Fiction, 2007) and Honoring the Temple of God (2008). He considers himself a Naturalist, meaning he pursues health in the most natural way possible. He studies and promotes nature as the only way to true health. From 2002-2004 he hosted the radio program Achieving Great Health, which was heard by thousands of people each day. His guests included some of the most well-known and respected names in the natural health world. With the help of his father, Dr. Robert F. McCauley, Sr. (Doctorate in Environmental Engineering, MIT, 1953) they started Spartan Water Company in 1992, which sold vended water machines in supermarkets. Robert Jr. founded Spartan Enterprises, Inc. in 1993. He is a Certified Water Technician with the State of Michigan. He is also a Type II Public Water Supply Specialist and has the certifications of S-5 and D-5. The McCauley family has a long history in the water industry. Bob's father pioneered environmental issues regarding ground water and drinking water quality. He received his Ph.D. from the Massachusetts Institute of Technology (MIT) in 1953 for his thesis on removing radioactive strontium from water. He earned his doctorate in Environmental Engineering in less than 2 years, one of the shortest doctoral studies in the history of MIT. He taught civil, sanitary and environmental engineering at Michigan State University for 18 years before retiring to run Wolverine Engineers & Surveyors of Mason, Michigan, for 17 years. His reputation throughout Michigan as a water quality expert was legendary. Bob worked for his father's company for 12 years learning the water business, which dealt primarily with municipalities, including water quality and sanitary sewer issues. After apprenticing with his father, Bob moved on to the bottled water business. He established greater Michigan's biggest selling bottled water: Michigan Mineral – Premium Natural Water. He was introduced to Ionized Water in 1995 and has done more to promote Ionized Water than anyone else in the industry. Bob often lectures and offers seminars on his Seven Component Natural Health Protocol . Bob is a Certified Nutritional Consultant and a Certified Master Herbalist. He is also a 3rd Degree Black Belt and Certified Instructor of Songahm Taekwondo (American Taekwondo Association).
View all posts by Bob McCauley →
This entry was posted in General and tagged Chlorella Cryptomonadales, chlorella pyenoidosa, Chlorella Sorokiniana, febico, Peroxisome proliferator-activated receptor, ppar, ppars, water, watershed. Bookmark the permalink.