So What Does Bob McCauley Eat For Dinner? (Part One)

Every night I eat the same thing and I have been doing so for over 12 years now, since 1999.  What I eat every night is a salad.  It never changes, a raw organic salad each and every night for dinner.  I would suggest to you that most people could not do it, eat the same thing every night, but actually it only sounds like I am eating the same thing every night.  The truth is that, although I eat a salad every single night for dinner, the salad itself is never the same.  If I ate the exact same salad every single night I would have gotten bored with it many years ago and probably could not have continued doing it.

In the beginning, I was eating around 70 to 80% raw fruits and vegetables; the remaining 20 – 30% was rice, which fills you up and provides you with calories, but in the end is not healthy.  A lot of Asians have trouble accepting this because rice is a staple of the Orient, as are noodles, which is a staple in China.  But like everything else I write when it comes to health I only state what I know to be the truth.

What varies in my salads are the greens that form its base and the vegetables that are included in it that happen to be in season at that time.  I consume dozens of different types of greens throughout the year, most of which come from either my garden and those that are found growing naturally in my yard.

The staples of my diet, the foods included in my salad each and every night without fail, are garlic, hot pepper, avocado, lime or lemon, seeds and nuts of various kinds.  In the winter in Michigan harvesting greens from my yard is next to impossible until late march or early April when the dandelions, oregano and kale come back.  So the winter months is when I do a lot of sprouting.  I usually sprout anywhere from 20 to 30 different types of seeds during those months.  My favorite sprouts are radish, fenugreek, lentils, red clover, alfalfa, kale and mung beans.  Sprouts are amongst the most powerful foods that we can possibly consume, which is ironic since they are commonly viewed as a food for wimps. 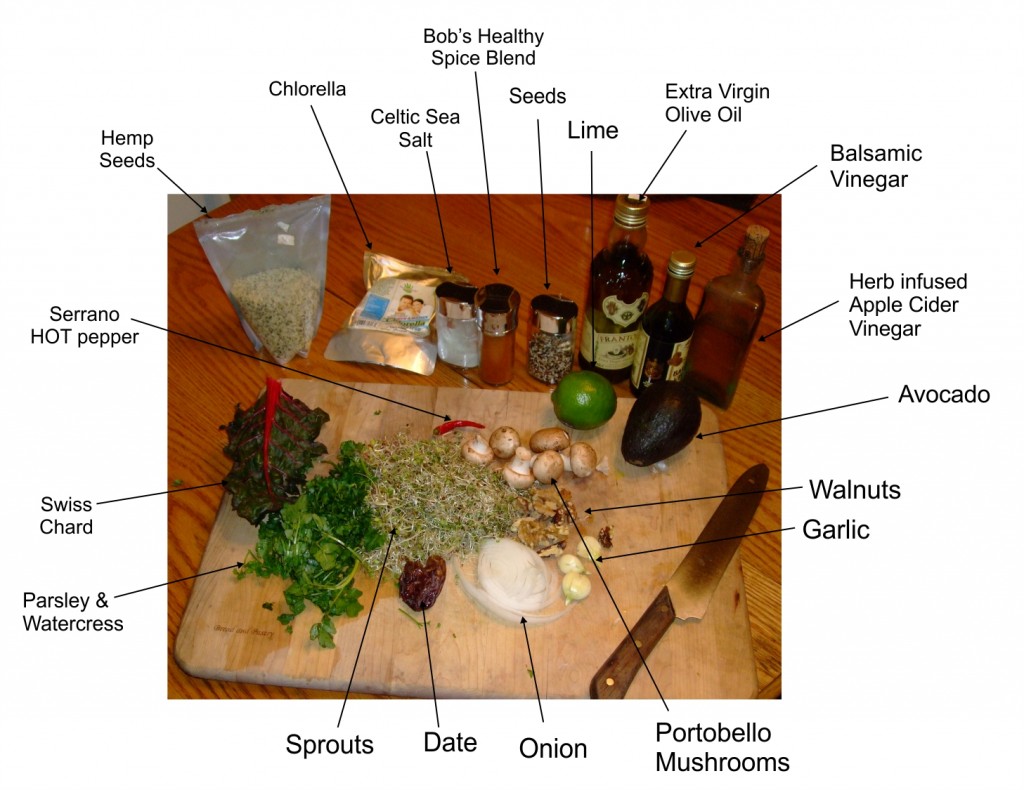 Sprouts are some of the healthiest foods because they are still growing when we consume them.  Other than algae, sprouts are our most powerful food source.  It is ironic that sprouts have a wimpy connotation to them because they are amongst the strongest foods known.  When a seed sprouts, it produces in great quantities some of the most powerful anti-disease chemical agents that are then spread throughout the plant as it grows to maturity.  A good example of this is the broccoli sprout, which produces sulforaphane, a powerful immune building, chemoprotective agent, at a concentration of 30 – 50 times of that found in the entire plant at maturity.  All sprouts have this high concentration of enzymes and other organic chemical substances in them in the first days of sprouting.

This photo was taken with everything gathered together for my salad.  I put the food on my cutting board and from there all I need is my big chopping knife.

Time involved: Gathering Foods: 3 minutes; Chopping: 2 minutes; Plating: 3 minutes; Clean up: 5 minutes.  Total: 13-15 minutes.  Time does not include enjoying a  delicious meal filled with the nutrients that come from raw foods, which God has made available in order that we can possess true health – the kind of health that simply can’t be found elsewhere.

Bob McCauley, ND (Robert F., Jr.) was raised in Lansing, Michigan and attended Michigan State University (BA, 1980 in Journalism). He is a naturopathic doctor, Master Herbalist and a Certified Nutritional Consultant. He has traveled extensively, both domestically and abroad, visiting over 32 countries. He published Confessions of a Body Builder: Rejuvenating the Body with Spirulina, Chlorella, Raw Foods and Ionized Water (2000), Achieving Great Health (2005), The Miraculous Properties of Ionized Water, (2006) which is the only book on the market that exclusively addresses Ionized Water, Twelve (Fiction, 2007) and Honoring the Temple of God (2008). He considers himself a Naturalist, meaning he pursues health in the most natural way possible. He studies and promotes nature as the only way to true health. From 2002-2004 he hosted the radio program Achieving Great Health, which was heard by thousands of people each day. His guests included some of the most well-known and respected names in the natural health world. With the help of his father, Dr. Robert F. McCauley, Sr. (Doctorate in Environmental Engineering, MIT, 1953) they started Spartan Water Company in 1992, which sold vended water machines in supermarkets. Robert Jr. founded Spartan Enterprises, Inc. in 1993. He is a Certified Water Technician with the State of Michigan. He is also a Type II Public Water Supply Specialist and has the certifications of S-5 and D-5. The McCauley family has a long history in the water industry. Bob's father pioneered environmental issues regarding ground water and drinking water quality. He received his Ph.D. from the Massachusetts Institute of Technology (MIT) in 1953 for his thesis on removing radioactive strontium from water. He earned his doctorate in Environmental Engineering in less than 2 years, one of the shortest doctoral studies in the history of MIT. He taught civil, sanitary and environmental engineering at Michigan State University for 18 years before retiring to run Wolverine Engineers & Surveyors of Mason, Michigan, for 17 years. His reputation throughout Michigan as a water quality expert was legendary. Bob worked for his father's company for 12 years learning the water business, which dealt primarily with municipalities, including water quality and sanitary sewer issues. After apprenticing with his father, Bob moved on to the bottled water business. He established greater Michigan's biggest selling bottled water: Michigan Mineral – Premium Natural Water. He was introduced to Ionized Water in 1995 and has done more to promote Ionized Water than anyone else in the industry. Bob often lectures and offers seminars on his Seven Component Natural Health Protocol . Bob is a Certified Nutritional Consultant and a Certified Master Herbalist. He is also a 3rd Degree Black Belt and Certified Instructor of Songahm Taekwondo (American Taekwondo Association).
View all posts by Bob McCauley →
This entry was posted in General and tagged living foods, raw food diet, raw foods, raw salad. Bookmark the permalink.

2 Responses to So What Does Bob McCauley Eat For Dinner? (Part One)